An advertisement for hanbok was shown in Times Square in New York, drawing the attention of the world.

On the large display board in Times Square in the center of New York, a video containing an ancient Chinese book was released that documented how the hanbok is part of Korea’s history and its own traditional clothing. 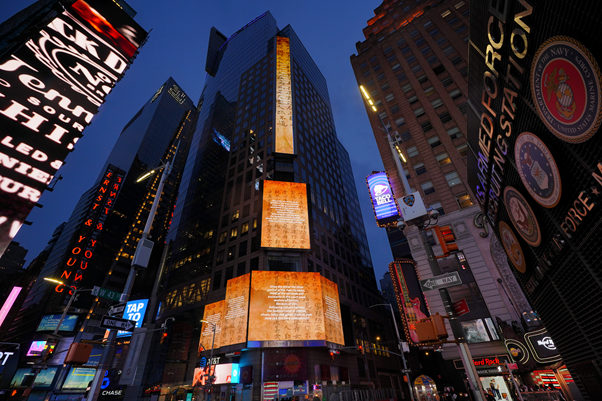 It was an advertisement regarding an old Chinese book stating that “clothes, shoes, hats, and other items are all enjoyed by the Goryeo people,” and, “People imitate them, and the world seems crazy,” along with the Chinese proverb “The wheel of history cannot be reversed”.

The company that posted this advertisement was Lakai Korea, a small Korean fashion company. This company conducted an advertisement in Times Square New York in collaboration with famous Korean celebrities to show that hanbok is Korean history and culture while celebrating  ‘Independence Movement Day,’ the day when Japan’s colonial rule was protested and the intention of independence was announced to the world, March 1, 1919.

Regarding the reason for the advertisement, Lakai Korea announced that they carried out this project with the purpose of promoting the history and status of hanbok to people around the world in order to respond to the Northeast Project of Korean culture in China, which has recently caused a serious issue.

Ordinary advertisements have the purpose of corporate interests and brand image, but this company conducted their advertisement based on patriotism to preserve the long history of Korea, which is in danger of being stolen. This is regarded as an unusual event in the advertisement industry, and it is inspiring many companies and people.

Shortly after the advertisement for hanbok commemorating Independence Movement Day was shown on New York Times Square, it spread to the Chinese and Japanese communities, causing various protests and malicious comments from netizens aimed at the company. Lakai Korea, outraged by criticism and ridicule towards Korea, announced that they will stop selling in China and pursue international lawsuits against Japanese and Chinese netizens.

Since the announcement that they will carry out international lawsuits, many Korean netizens have supported the company and requested to help them. Responding to this, the company launched the ‘Thank You Random Box’ which was met with an intense reaction as soon as it was released. A portion of the profit from this random box will be used for sponsoring international lawsuits, the sponsor’s names will be listed, and they will be given a Taegeukgi badge as a token of sponsorship.

It has become a hot topic in Korea as well as overseas, and various media outlets reported about this small company confronting China’s Northeast Project.

Lakai Korea replied with the reason for using the old Chinese books. “China is claiming that hanbok originated from Hanfu. We decided that the ancient Chinese books were clearly a way to prove that hanbok is Korean, so we proceeded with the advertisement.”

Immediately after launching in 2017, Lakai Korea released a product with a Korean sentiment with KR Dokdo sneakers which sponsored the Dokdo Association for the purpose of protecting Dokdo, a Korean territory. This company constantly strives to spread the history of Korea such as through projects to correct the distortion of history by Japan and China and sponsoring for those who have contributed to the country including the Independence Patriots Association, Korean War veterans, comfort women victims, etc.

Koreans call this company a patriotic company, and are sending great support to Lakai Korea, which is setting a model of conduct for the country.